Been pretty busy this term so not had much time to update this blog! Anyway, I’ve been working with In Harmony Telford and Stoke, directing the Telford orchestras which is a fantastic challenge but thoroughly enjoyable. I lead 4 ensembles: 90 Year 2 strings; 60 Year 30 Strings; two orchestras with around 100 mixed instruments from years 4 – 6 in each. My orchestra day is really tiring but really rewarding. The children are doing so well.

I’ve composed some of the music, and others bits I’ve written backing tracks for – snippets of which are on the video below.

Here’s a little video about the project (you can even see me in a cowboy hat…) Enjoy!

You can find out more info about the project at their website.

As I posted about a few months ago, earlier this year I was involved in BCMG’s Resolution project, exploring scientific research through music and I composed a piece for secondary school students to perform. As part of my research, I drew a little storyboard which was made into a little film (thanks to Jonathan Lee). I’ve finally managed to put the audio recording of the performance by the students together with the animation. And here it is (make sure you turn your sound up – the beginning is very quiet):

‘Molecular mimicry’ is a term that describes the process of the body’s immune system mis-recognising its own antigens (particular proteins which live on the surface of cells) for those of a foreign pathogen and attacking itself. This piece explores the hypothesized process of the body developing Sjögrens syndrome.

This bacteria, or pathogen, is very similar in appearance to some of the body’s own cells. In the music this is represented rhythmically similar harmonies. The melody and harmonies are locked into by another rhythm:

This depicts the way the body uses a ‘lock and key’ type mechanism when discovering and reacting to particular antigens. See https://www.youtube.com/watch?v=QIN5sSUlZWk

This in turn triggers an immune response – an alarm – and the body begins to attack itself. In Sjögrens Syndrome this takes a number of forms, one of which is that the tear ducts and mouth dry up, shown in the music by the change from loud resonant sounds into high pitched dry, scratchy sounds.

So I have now got hold of two recordings from the CBSO Our City Our Past project, which I posted about before.

The first is a performance of the piece A River Through History, composed and performed by young people from Shenley Academy at the CBSO Centre in May 2013.

The second recording is of an arrangement I made of the piece for full orchestra, performed wonderfully by the City of Birmingham Symphony Orchestra at Symphony Hall in June 2013, conducted by Michael Seal.

Yesterday I attended both of the CBSO’s schools concerts involving the final performance for the Birmingham History Project I have been involved with. The full orchestra performed in Symphony Hall with audiences of 2000 children in each concert.

The reason for my excitement was that I had arranged a piece written by secondary school pupils from Shenley Academy for the full orchestra to perform. Earlier in May the young people performed the piece themselves at the CBSO Centre, then I went away and arranged it for the orchestra. My main concern whilst arranging the music was that I needed to balance needing to make the piece sound ‘orchestral’ and giving it a ‘professional’ edge, without losing the sense of the original material composed by the young people.

The ideas from the students were really good and fortunately I was able to work really well with the material they had composed without adding to it very much at all. I felt like I was able to be true to their original intentions. Fortunately I was able to go into the school and do a session with them to explain to them exactly what I had done with their piece, so that they could understand why they might not hear ‘their bit’ played by the same instrument or in the same way. I think this was a really valuable session.

From talking to them after the concert, they seemed really pleased that they could hear ‘their music’ in the piece even though I hadn’t just taken their piece note by note and orchestrated it.

It has taken a lot of work, but I’m really pleased with the way it turned out. I’m hoping to get a recording online soon.

This weekend is Birmingham’s ArtsFest, a mega two-day arts festival in the centre of Birmingham which is completely free! Obviously a brilliant idea. I love that you can go into town and check out loads of different performances of various genres. An excellent idea! This year I’m having a piece played by Futuresonic musicians which is a really fun piece as you can see:

On Saturday 10th September at 2pm we’re performing in Birmingham Museum and Art Gallery, Gallery 20 – Sorting the Nation by me, and into the darkness he spoke… by Joanna Karselis and a piece by Shelly Knotts. This programme will be repeated at 4pm on Sunday 11th September in Room 3 of the Council House (not, as it says on the original ArtsFest programme, in the HMS Daring Room because that room is 4m x 5m and we have 7 performers including a drum kit and I requested we have room for an audience!) We are also playing Shelly’s piece outside on Cherry Street at 12.30pm on Sunday.

We have some ace musicians playing for Futuresonic this time:

This our rehearsal last weekend in Oasis Church‘s new community space (yes, a rehearsal space we can use for free!) at Edgbaston Cricket Ground. 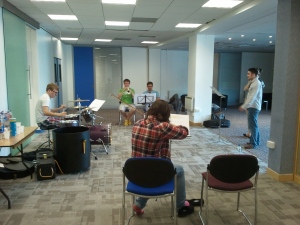 We were using those paper ‘chatterbox’ thingys that girls make when they are young:

Underneath the flaps there are musical instructions of what to play. On Sunday we’re gonna get the young people to make their own and then in live performance use them to make choices about what to play – I think its a great idea!

Maybe I need to incorporate more fun into my music…

This Sunday was the second part of a two-day composing workshop I was doing with BCMG called Feel the Buzz. Its a workshop for 14-18 year olds and the format is a kind of collaborative composing/improvising together approach. Jackie Walduck was leading with BCMG musicians and she used a kind of 1-page score technique which the young people fleshed out collaboratively. All based around the nOSTalgie Cabaret BCMG are doing in May.

We were drawing parallels between the past and present, so one piece we did was based on Mack the Knife (the words in that songs are really quite horrific – check them out!) and another was on 21st Century Pirates! Nice!

There was a final performance of all the music produced on Sunday evening and it was great! It was really nice to see young people all working creatively together and having input into the final pieces. And whatever Birmingham City Council think about BCMG, this project engaged an incredibly diverse group of young people from many different backgrounds.

Unfortunately due to cuts, Birmingham Music Service (who have generously funded this project for the last 10 years!) are unable to continue funding it next year, although they really want to! So it means BCMG are going to have to find to some money from somewhere to keep it going. Really hope it doesn’t stop because I think it is a brilliant project.

Last Thursday I had a pretty busy day!

Went to Music Play with Early Years conference run by Music Leader. Felt a little like I stuck out like a sore thumb… it appears men are vastly under-represented in the world of Early Years music… ie only 3 men in the entire conference… And I know no harm was meant by the speakers at the conference but I’m not sure highlighting my presence as a token male was the best way to approach this…

It did raise the question of why there aren’t more males working in early years? (answers on a postcard) I think it is (unfortunately) quite a taboo direction for men to go in. Even in this day and age I think people raise an eyebrow at the thought of a male early years worker. (This is also true of male nurses, according to my nurse friend – although they are loved by hospitals, society in general has a bit of  thing about it!)

Anyway, the conference brought two things to my attention – the first was brought up by Dr Susan Young about the need for child-led, adult-led and child-and-adult-led forms of activity for the best outcome. The last of these is the activity which is lacking in music play settings- this I think is partly because it is the hardest form of activity to successfully achieve.

The other thing was the very interesting teaching methods of Sandra Barefoot & Sarah Moody from Visible Thinking. Their creative use of art, drama and music for early years play seemed like a great idea – particularly the use of what essentially turn into graphic scores as you demonstrate. Its about using marking so that the sounds made on instruments are represented on paper. This seemed to engage children on a different level, and seemed like a great way to provide another gateway by which children can access the music.

In the evening I did a pre-concert workshop at Ninestiles School in Yardley with BCMG before their first Urban Tour concert. The concert turned out really well. The three percussionists – Simon Limbrick, Julian Warburton and Scott Wilson did a great job. I particularly enjoyed Tag by Philip Cashian which has real character to it despite the chance techniques employed during the reading of the score. And of course, Okho by Xenakis is a fantastic piece – always a winner for me!

Went on a one-day Sound it Out event on Saturday which was pretty good – nice to catch up with people from Sound It Out and the New Horizons course I did last year. Although Mark Bick started the day on a depressing note about cuts to the arts, things did pick up and he did talk say that there could be new opportunities for Community Musicians – if the ‘Big Society’ idea actually begins to work…

There was also a great talk on Social Pedagogy and the role that community musicians can play with regard to this – I can really see how music can play a real role not just in education but also it has a real social impact, being a way in which communication barriers can be broken down.

Then Bobbie Gardner gave a brief but helpful talk on social media and its role for community musicians – just wish there had been more time on that – its tricky to fit it all in in 30 mins!

And of course there was the traditional sharing of warm-ups / activities which is always enjoyable!!!!! Winner!

So on Friday evening my friend Shelly and I put on a new music night at We Are Birmingham which was cool. We were a bit rushed for time in preparation for it but the musicians pulled it all off after an intensive day of rehearsals! The idea was to play music by emerging composers – people who have not made it into the ‘big-time’ quite yet – people like myself! It’s really hard to get performance opportunities for instrumental composers so it was good to give it a go.

It was also nice to meet Kurly Mcgeachie – a performance poet from Birmingham. I liked his stuff – a real positive vibe to it!

Quite a diverse audience attended – not just your usual contemporary music lovers. There were certainly some interesting characters there…

But it seemed to go down well and was pretty well attended! Long may it continue. I’ll post some audio/video up here when I get some.